PALM SPRINGS, CA – The Palm Springs POWER had to come from behind Tuesday night against the Inland Empire aces, but they did and in fantastic fashion. After allowing the first two runs of the ballgame in the third, the POWER took the lead in the 7th with three and tallied eight insurance runs in the eighth to win by the score of 11-2.

The POWER started Nick Baker (SO, California State University, Chico) looking for his 9th win in as many appearances. The Aces knocked four straight one-out groundball singles in the third to take a 2-0 lead. After a leadoff single in the top of the fourth off Baker, he retired 11 straight and 12 of 13 to finish his night. He induced a career-high and POWER season-high 15 groundball outs in route to his team-high ninth win, improving to a perfect 9-0 in nine appearances, a POWER single season record for wins. 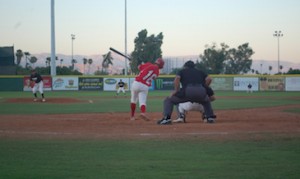 Zack Haley went 2-for-3 with the game tying hit, a run, and a walk

With two on and two out in bottom of 7th, Zack Haley (SR, Liberty University) knocked a line drive into center field, scoring Alex DeLeon (JR, University of Kansas) and Justin Cureton (JR, Indiana University) to tie the game at two. David Kiriakos (JR, Vanguard University) pinch hit for Sean Flanagan (SR, University of Iowa) in the next at-bat and hit a hard groundball down the third base line to give the POWER a 3-2 lead that they would never surrender.

They piled on eight runs in the eight inning, bringing 13 batters to the plate against Aces reliever Jonathan Kennedy. Ryan Santhon picked up his third save with a perfect two frames, striking out five. With his first strikeout, his 53rd, he broke the POWER single-season record for strikeouts. The new record now stands at 57.

The POWER will try to knock off the Aces again tomorrow night to sweep the four-game season series before finishing up SCCBL regular season action this weekend against the L.A. Thrashers Friday and Saturday night. They will then have back-to-back days off in preparation for the postseason.

Game one of the SCCBL championship series will be Tuesday, July 26th at 7:05 pm at Palm Springs Stadium as the POWER host the So Cal Athletics. Gates open at 6:00 pm. So Cal will host game two at Rio Hondo Community College in Whittier, CA on Wednesday July 27th at 2:05 pm. The POWER will host game three, if necessary, on Thursday at 7:05 pm back in Palm Springs.

Another Victory in the Cards For POWER, 7-4 Over Aces