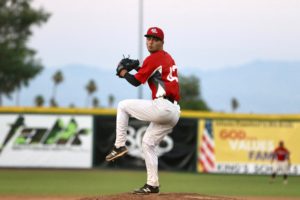 Palm Springs – The Palm Springs Power hammered out a downpour victory 13-0 over the East LA Dodgers on Tuesday night. The win was the largest run output of the season as Palm Springs remains undefeated 6-0.

Palm Springs plated three runs in the second and three runs in the third to open the scoring. Jake McCaskey launched the first home run of the season for Palm Springs in that third inning. Casey Kleinman reached base four times with three hits including a double. Josh Hernandez, Jake Biscailuz and AJ Barraza all plated two runs each.

Every Power batter reached base in the game, with each starter picking up a hit. Eric Telarroja tossed six shutout innings with four hits to improve to 2-0 on the season. The Dodgers mustered just four hits while committing six errors in the field. Nick Beardsley threw three shutout innings without allowing a hit.

The Power host the San Diego Waves on Wednesday night. It’s Kids Day at the ballpark where kids twelve and under get into the game for just $1. Tickets are available at the Palm Springs Stadium box office. First pitch is at 7:05 PM, gates open at 6:00 PM. 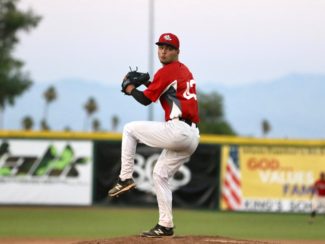