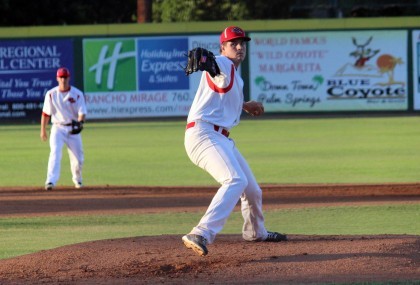 Ryan DeJesus picked up his third win of the year as three pitchers combined to pitch the POWER’s first shutout of the year. Michael Massi had a strong day at the plate, going 2-4 with two RBI.

After DeJesus set Team San Diego down in order in the top of the first, Palm Springs wasted no time jumping in front. Bennett laced a bullet down the third-base line to score Brett Sullivan from first, and later scored from second base on a routine ground ball by Austin Barrett to give the POWER the lead, 2-0.

The score held there until the fifth inning. Massi led off with a single and eventually scored on Sullivan’s sacrifice fly to make it 3-0. With two out and no one on, Bennett reached on a pop-fly double, the first of seven consecutive batters to reach safely. The POWER  batted through the order by the time the inning was over, with Massi slapping a two-RBI single to push the lead to eight, where it would stay.

Keaton Hernandez threw two shutout innings in relief of DeJesus before Pete Reyes made short work of Team SD in the ninth to seal the five-hit shutout.

With the victory, Palm Springs has now equaled the second-best start in club history. The POWER also started the season 10-0 in 2010.

Palm Springs returns to the field on Friday to take on the Inland Valley Pirates. First pitch is scheduled for 7:05 p.m. at Palm Springs Stadium