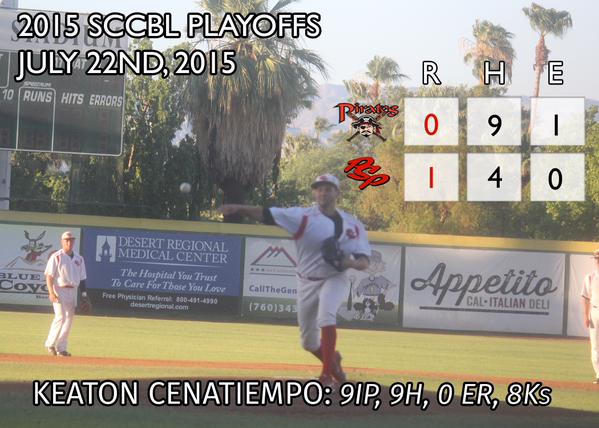 PALM SPRINGS, Calif. – The Palm Springs POWER are moving on to another SCCBL Championship Series after Keaton Cenatiempo delivered a clutch complete-game shutout against the Inland Valley Pirates.

The POWER found the scoreboard first after Dillan Smith lifted a fly ball into centerfield that scored Ryan Raslowsky in the third inning. That run would serve as the only run the entire game and that would be all the POWER would need.

Keaton Cenatiempo rose up to the occasion as he started the decisive game three and threw nine innings of shutout baseball. Cenatiempo allowed 10 base runners, but would strand them all on the base paths. The POWER defense did not register an error all game and turned two double plays to help keep the Pirates off the scoreboard.

The Pirates came dangerously close to tying the game in the top of the ninth inning after the Pirates had runners on the corners with nobody out. Kyle Jackson and Andrew Alvarez started the inning off with back-to-back singles, but Cenatiempo wasn’t phased as he got the next batter Justin Gomez to hit a ground ball to first-baseman Daniel Sander. Instead of taking the ball to the first base bag, Sander threw the ball home to get Jackson out at the plate and preserve the one-run lead. Cenatiempo would then strike the next batter out and get the final batter to ground out to first base.

This was the third complete game for Keaton Cenatiempo on the season as he also recorded eight striekouts and lowered his ERA to 1.52, now a team-lead.

The game three win has propelled the POWER into the 2015 SCCBL Championship series against the OC Riptide starting on Friday night at Palm Springs Stadium. If the POWER can win the series, it will be their fourth in a row and seventh in their history. Game one will start Friday night at 7:05 with the gates opening at 6.