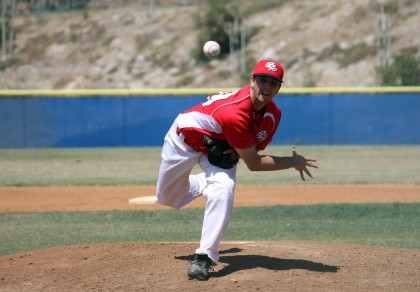 CHULA VISTA, CA – Nick Baker threw seven innings while striking out seven batters and allowing one run as the POWER (14-2, 8-2) defeated Team San Diego 8-2 in game one of a doubleheader at Otay Ranch High School.

Shortstop Adam Law led the way on offense for Palm Springs going 3-for-4 with an RBI and two stolen bases.

The POWER got on the board first when Anthony Torres, who singled to start the inning, came home on a pass ball by Team San Diego catcher Gary Foster.

They would add four more runs over the next three innings including Brooks Klein’s RBI single in the fifth.

Team San Diego starting pitcher Evan Taylor shut out the Palm Springs POWER (14-3, 8-3) over seven innings in a 4-0 win in the second game of Thursday afternoon’s doubleheader. The win was the first in SCCBL Conference action for Team San Diego.

Taylor retired the first 19 hitters of the game before Dylan Becker singled to break up the perfect game. The POWER would strand the bases loaded in the inning to finish Taylor’s outing.

Anthony Parise finished off the victory with two shutout innings for the save.