Past POWER Closer Bryan Shaw Works Way Back To Bigs 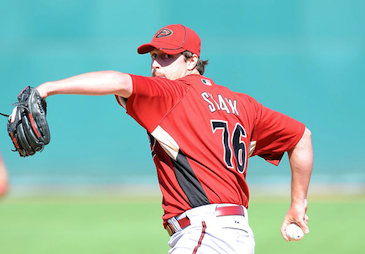 Bryan Shaw was recalled on July 20, just six days after the original publish date of this story, and the righthander is starting to see increasingly more important work on the mound. The former POWER closer picked up his first two MLB holds this month, keeping a 2-0 lead against the Brewers in tact with a scoreless two outs in the eighth inning on July 21 and held an advantage for Arizona against the San Diego Padres on July 27. The POWER organization continues to root on Bryan and his continued Major League success and wish him the best of luck.

Bryan Shaw saved eight games for the POWER in 2006, posting a 1.13 ERA in 16.0 innings, striking out 21 batters, and allowing a modest seven hits and only six walks. On June 10 of this year, Shaw trotted out to the mound; it was much like any night he spent at Palm Springs Stadium–the loud crowd, the music, the lights, the professional environment. Only this time, Shaw strode to the mound in a major league uniform.

In front of thousands of fans at Sun Life Stadium in Miami, Florida, Shaw debuted for the Arizona Diamondbacks, the first time a former POWER player played in a MLB game. Landing at midnight on a two-legged flight from Colorado Springs to Dallas to Miami and throwing less than 24 hours later was not how Shaw envisioned his call to the Majors. Pitching in a big league game for the first time, however, is always a dream come true. With a runner on second in the eight inning and the D-Backs trailing 6-4, former Dodger NL MVP Kirk Gibson, now the manager for the Diamondbacks, made the call to the bullpen. Shaw was asked to get big outs, keep his team close late in the game–something he was asked to do countless times as the closer for the POWER in Palm Springs in 2006 and for three seasons at Long Beach State. 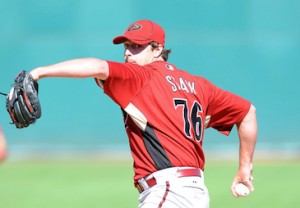 Shaw channeled his inner fairytale moment; looking for a groundball, Shaw got the batter to foul a few pitches off, and then, he got the first Major League he faced to strike out. Marlins pinch hitter Scott Cousins took a slider for strike three. Shaw induced a groundball to get out number two and got the final out of the inning with a flyball. Shaw did the job. No runs. Inherited runner stranded.

The Diamondbacks didn’t come back in the game, but Shaw had made it to the Show. “It was an awesome opportunity to be there and learn from those guys,” Shaw said about his time with the big club.

Arizona selected the 6’1″ right-hander from Camp Pendleton in the second round of the 2008 MLB draft. After working some a starter in ’09 and ’10 to work on his secondary pitches, Shaw settled back into a relief role. After his two-week stint with the club, the Diamondbacks optioned Shaw back to AAA Reno, where he is still playing for the Aces.

Shaw said that to get back he is simply trying to keep his routine going and not change much: “Guys [in the Bigs] told me not to change too much. My stuff was good enough to get up there, and I have to just keep doing what I am doing.”

Shaw admitted that he felt the weight of the pressure to get back quickly in his first few outings for Reno after being sent back down, as he gave up three runs in his first three outings back. Shaw explained that eventually he settled back in. In his last two outings for the Aces, Shaw tossed perfect frames, one for a save.

“Everywhere you play you pick up pieces that make you better. Palm Springs was no different,” he said about playing for the POWER in 2006.

The POWER organization sends it congratulations to Bryan and hopes that we will all see him back on the hill in the Majors soon, perhaps even closing out games in the ninth like he did in Palm Springs Stadium just five short years ago.