PALM SPRINGS, Calif. – On a warm Memorial Day morning at Palm Springs Stadium, many players were present at the Palm Springs POWER Tryout Camp to put on a display of their talents in hopes to have a chance to crack the POWER’s Opening Day roster as the 2017 SCCBL season approaches. Of those hopefuls, a local kid named Jake Mesa made the cut.

Mesa, a La Quinta native and freshman at College of the Desert, threw gas in his tryout in front of the POWER staff and really impressed manager Casey Dill, enough for him to take a flier on the 6’2″, 160-pound right hander. Jake was the ace of the pitching staff his freshman season this year at COD, but will get his innings out of the bullpen this summer.

With the annual Tryout Camp complete, only a few days remain before the beginning of the 2017 POWER season. Some returners from the 2016 summer campaign include POWER hitters Taylor Grace, John Mauldin, Ryan Mota and Cody Ducote, their number one pitcher in Jordan Dreibelbis, some key bullpen arms in Bryan Menendez and CJ Broussard, as well as closer Gabe Gentner. Opening night is this Friday, June 2nd at 6:35 PM in non-conference action against the So Cal Catch.

Fireworks follow the game, so grab your family and friends and get tickets now! Purchase POWER Tickets HERE 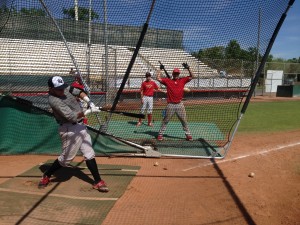