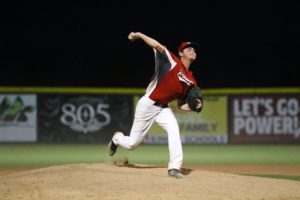 Palm Springs – The Power offense came to life in the seventh for a late inning rally, propelling them over the San Diego Force 5-1 on Tuesday night. Power pitchers allowed just three hits.

Eric Telarroja started for Palm Springs, giving up just one run on a double steal in the fourth inning. He tossed four innings with just two hits allowed. After a run for the Power in the second, San Diego pitching shut down the offense, most notably starter Chase Martinez.

In the seventh with one out, six straight would end up reaching for Palm Springs on a hit batter, two hits and three walks (two intentional). The late inning rally was keyed by a Ryan Rodriguez two run single. The Power scored four times in the inning to regain the lead late.

The Power bullpen was solid. Jamison Hill was strong for two shutout innings with four strikeouts. Dom Mota earned the victory after facing six batters in the seventh and eighth innings, striking out every batter he faced. Matt Henry worked out of a mini-jam in the ninth with a game-ending double play. He earned his first save in his Power debut.

Palm Springs improves to 9-1 on the season and snaps San Diego’s seven game win streak. The two will meet again on Wednesday night at 7:05 PM to wrap up the brief two-game set. It’s Kids Day Wednesday at the ballpark. Kids 12 and under get in for just $1. Tickets are available at the Palm Springs Stadium box office. 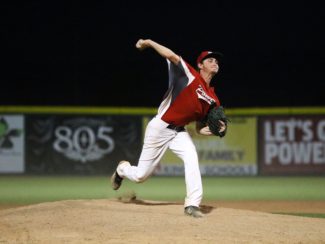