PALM SPRINGS, CA – In their return to Palm Springs Stadium after a brief road trip, the POWER picked up where they left off, shutting down the San Francisco Seals, 5-0, in the opener of a three-game series.

Julian Esquibel (SO, Palomar College) struck out seven and walked only one. He allowed just three hits and never faced more than four batters in an inning, going seven strong for the POWER. Esquibel improved his record to 3-1. 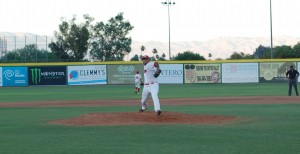 Esquibel was effective, with only 80 pitches in 7 IP

Hank Yates (JR,  undecided) led the offensive attack for the POWER. Making his ninth start of the season, the centerfielder hit a one-out triple in the second inning and later scored on an RBI single by Ryan Garvey (FR, University of Southern California).  Carney Chamberlain (SO, Contra Costa College) also scored on an RBI double by Chett Zeise (SR, University of Iowa), giving the POWER a 2-0 lead.

David Kiriakos (JR, Riverside City College) had another big day for the POWER, reaching base four times on a walk, hit-by-pitch, single and double. He scored on an error in the fourth inning to make it a 3-0 Palm Springs lead.

The POWER added two more in the sixth, as Kiriakos and Jose Garcia (SO, College of the Desert) scored on RBI’s by Ryan Jones (JR, Ventura College) and Yates. That score of 5-0 would hold up, as the shutout of the Seals improved the POWER record to 15-3 on the season.  They remain in first place in the Southern California Collegiate Baseball League with an 8-1 record. The Seals are not in the SCCBL.

Game two of the series will take place Saturday night at 7:05 p.m. It is Military Appreciation Night at the ballpark. The gates at Palm Springs Stadium will open at 6:00 p.m. All POWER games can be heard live on www.PSPBB.com, with select games simulcast on NewsTalk 920 KPSI Palm Springs. Also, be sure to check out our blog for more team information, including the lineups before every POWER game.

Flanagan and Guerra Lead POWER in Avenging Sweep of Pirates, 4-3 and 10-4