Palm Springs, CA – The Palm Springs POWER scored early and often in their 9-8 victory over the SoCal Cardinals at Palm Springs Stadium on Friday night.  The POWER put up two runs in the first inning and hung a crooked number up on the board with seven runs in the third inning en route to their nail biting victory.  The win improves the POWER to 15-1 (10-0) on the season. 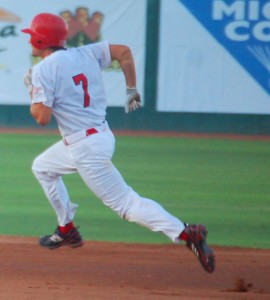 Chris Wilson sparked the POWER offensive surge with a two-RBI single in the first.  Wilson hit a sac-fly that brought home Brett Christopher to open up the seven-run third inning for the POWER.  Corey Black followed with a long two-RBI standup triple to right field that scored Chett Zeise and Marcus Romero.

With two outs in the inning, POWER designated hitter Brett Hambright popped up a routine fly ball to Cardinals’ right fielder Cameron Gardner, but the ball was dropped and Black was able to score on the play.  The scoring didn’t stop there, as Ben Woodchick stepped up two batters later and drove a two-RBI standup triple of his own to right field, scoring Hambright and Brandon Macias.  Christopher capped off the POWER marathon third inning with an RBI single.

“I was looking for a fast ball on the outside corner and I got it, got my hands to the ball, got it down the line … a standup triple, it was what I was looking for,” said Black after the game.

When asked about his identical two-RBI standup triple, Woodchick said, “It was a big situation and I was just trying to come up big and luckily it fell right inside the line.”

The POWER also received a solid performance from starting pitcher Thomas Taylor, who only gave up two runs on three hits while striking out two through four innings.  Craig Rasmussen relieved Taylor in the fifth and gave up only two runs on four hits while striking out two through two innings out of the bullpen.  Kesley Kondo came in to relieve Rasmussen in the seventh and tossed two innings of shutout baseball.  Gabe Aguilar came in and gave up four runs in the ninth before shutting things down on the Cardinals for the POWER victory.

The POWER return to action Saturday night at Palm Springs Stadium when they look to take game two of the four game series against the SoCal Cardinals.  First-pitch is set for 7:05 PM and the gates open up at 6:00 PM.  It is going to be DOC Night and Indio Youth League Night at the ballpark.