Complete performance from POWER in 7-0 victory over IV Bucs

PALM SPRINGS, Calif.– Dominant showings both on the mound and at the plate secured a 7-0 win for the Palm Springs POWER over the Inland Valley Buccaneers. Luke Barker tossed seven shutout innings, and the offense plated seven runs in the first three innings to secure the victory early on.

Barker started off hot, striking out DJ Peters to complete a 1-2-3 first inning. Barker, a righty out of Chico State, got his first win in his second start of the season.

It didn’t take long for the POWER to jump out to an early lead. Ryan Raslowsky walked to start off the home half of the first, and Harry Shipley followed him by reaching on bunts. Connor Hornsby drove in Raslowsky on a groundout to make it 1-0.

They would increase that lead in the second inning. Barker’s teammate at Chico, Dylan Garcia got it going with a bloop double into left field, and Nick Jackson singled to drive him in. Jackson himself would score when Shipley singled back up the middle with two outs.

Seven-nothing is what that lead would become as four more runs came around to score in the third. Daniel Sander, Chad Clark and Jackson all singled and scored. Raslowsky stayed hot, doubling to drive in another run in the form of Dillan Smith, after the speedy outfielder Smith avoided a double play by running hard to first.

POWER starter Barker was rolling, only throwing 37 pitches to get through four innings. The perfect game would only last 4 2/3 innings, as the Bucs broke up Barker’s bid with back-to-back singles with two away in the top of the fifth.

Finishing with seven strikeouts and no walks in seven innings was Barker. He only allowed two hits. Tyler Finkler came in to relieve Barker, and picked up right where his teammate had left off. Making his first appearance on the mound for the POWER, Finkler worked a 1-2-3 eighth, striking out two of the three batters he faced.

Jordan Cavazos came on for the ninth inning, and got through it without much ado. He’s still yet to surrender an earned run on the year after working a scoreless night to end the ballgame.

Make sure to come back as the POWER go for the sweep against the Bucs tomorrow night at Palm Springs Stadium. First pitch is at 7:05 pm, and the gates open at 6:00 pm. Admission is just one dollar for Family Appreciation Night, brought to you by Jack in the Box.

Palm Desert Natives Back Where They Belong 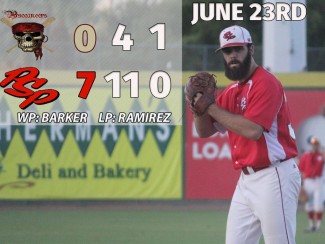