PALM SPRINGS, Calif. It was the home team that triumphed in Sunday’s rubber match between the Palm Springs POWER and the Santa Rosa Smoke. A strong pitching performance from Danny Diaz set the tone, and the POWER offense was able to provide more than enough run support for the tall lefty.

The visiting Smoke won Friday night’s contest 6-4, the first home opener the POWER had lost in 10 years. But, manager Harry Gurley’s POWER were able to rebound, winning games two and three to take the series.

The Smoke struck early again, getting out to a 1-0 lead in the top of the first. Vlad Gomez drew a walk before stealing second, and a passed ball allowed the Smoke second baseman to get to third. Ian Horne singled to drive him in.

In the second inning, the Smoke doubled their lead. A Mike Bradley sacrifice fly scored Isias Alcantar. The visitors added another run in the fourth, with Ryan Myers coming around to score after stealing second. Christian Gurrola plated Myers, recording his fifth RBI of the series.

The POWER got one back in the bottom of the fourth. Daniel Sander reached on a walk.  Erik Maki’s second single of the night scored the first baseman who plays his college ball at Purdue.

Catcher Andrew Paz started a rally in the fifth with a double down the right field line. It was the first hit of Paz’s POWER career. Sander singled to score Paz with one out. Sander’s Purdue teammate Harry Shipley scored the game-tying run minutes later. Dylan Garcia grounded deep into the hole at second, and Gomez made an error fielding the ball allowing Shipley to score.

Diaz was effective at getting the Smoke hitters to do his bidding, inducing three double plays in seven innings of work. Striking out seven and allowing just one earned run en route to picking up the win, it was a positive start to his POWER career.

Two more runs in the bottom of the seventh put the POWER up 5-3, and it was a lead they wouldn’t relinquish. Shipley set up to sacrifice bunt Nick Jackson, but Santa Rosa reliever Cullen Cosco’s throw over to first was low. Jackson came all the way around from first base to score, and Shipley was in to third standing up. He scored on a passed ball that got by Smoke catcher Mike Bradley.

After tacking on another insurance run in the bottom of the eighth, the score was 10-3. The Smoke were unable to improve the scoreline from their perspective, due to a strong bullpen outing from the POWER.

Brian Yount came on in relief of Diaz. Entering the game in the eighth inning, Yount was able to record six outs without too much difficulty. The right-hander effectively scattered a pair Smoke singles in the eighth and retiring the side 1-2-3 in the ninth to avoid giving up any runs.

With the win, the POWER improve to 2-1, while the Smoke fall to 1-2. Next up for the POWER is a two-game midweek series against the Fresno Valley Bears. Home games are Tuesday and Wednesday night, and both start at 7:05. 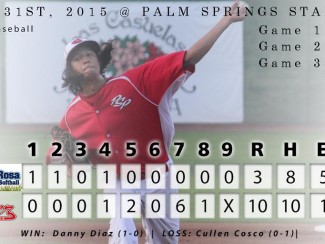