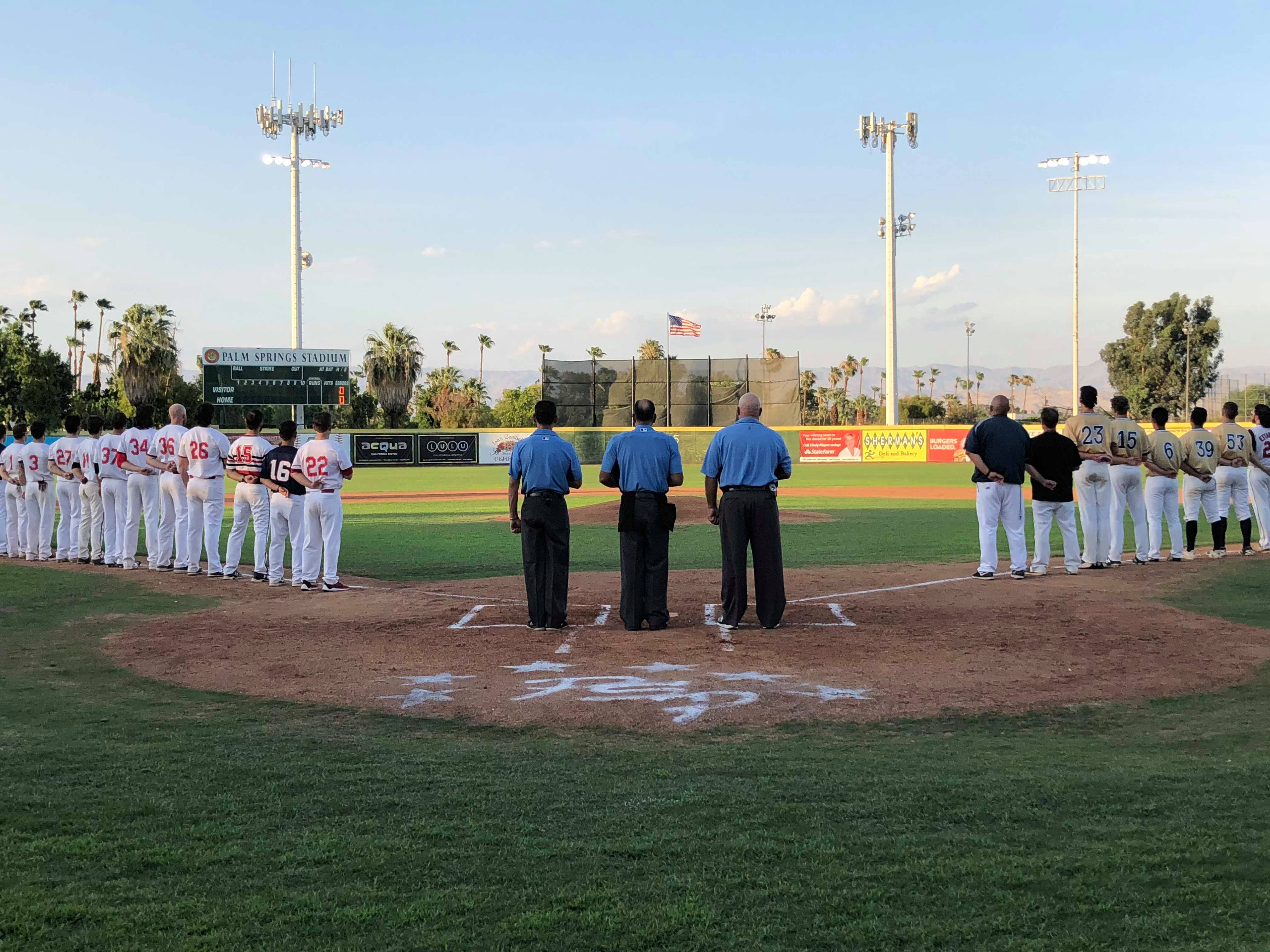 Recap and Photo By: Alisha Alexander

PALM SPRINGS, Calif. – The 2018 SCCBL All-Star Game started on a high note with a power-filled Home Run Derby.  Kory Brown of the Inland Valley Bucs wowed at the plate, launching 15 total big flies to capture the title. Following the long-ball competition, the East Team (Power, Bulldogs, Bombers) faced off with the West (Force, Pirates, Bucs) to come away with a 7-6 victory.

The fans that filled the stadium in Palm Springs were treated to a show during the home run derby that featured Kory Brown of the Bucs, Ethan Watt (Arizona Christian) of the Bulldogs, Jake Anderson (UC Colorado Springs) of the Pirates, Joseph Kim (Azusa Pacific) of the Bombers, Shunto Kamishida (Keio Univeristy, Tokyo) of the Power, and Don Roethler (Southwest Baptist) of the Force.  Brown and Kim faced off in the finals of the event, and Brown hammered nine in the final round to take the crown.

Jonathan Buckley (St. Mary’s) and Ryan Losman (Southeast Missouri) each got the start for their respective teams, and each tossed an inning of shutout ball.  Brady Shockey (Power/USC) opened the scoring in the bottom of the second with an RBI double to put the East up 1-0, before they managed another run to take a 2-0 lead into the third.

Malcolm Smith (Bucs/East New Mexico) got the West on the board in the top of the third with an RBI single to bring them within one.  A misplayed ball by the East in the top of the fourth gave the West the opportunity to take a 3-2 lead that they held until the fifth.

John Mauldin (Power/New Orleans) came up big for the East in the bottom of the fifth, plating two with a go-ahead RBI triple to put them up 4-3.  The West fought back in the top of the seventh with an RBI double off the bat of James Shimashita (Force/San Jose State) to even the contest at four apiece.  Back-to-back fielder’s choices from Smith and Chase Wehsener (Pirates/Baylor) brought in two to give the West a 6-4 lead.

Things got hectic in the bottom of the eighth.  The East took advantage of an error that kept the inning alive, and used to momentum to bring in three runs to regain the lead at 7-6.  They hung on to win by the slim margin.

With the All-Star Game now in the rearview, the attention now turns to the 2018 SCCBL Playoffs that begin on Tuesday.  The Power hold the top seed and will face the Bucs, and the Pirates will face-off with the Force, home-field advantage being determined by a double header on Sunday.