PALM SPRINGS, Calif. – A clutch 3-run sixth inning pushed the POWER past Top Speed, 4-2 in the first game of a three-game set. Starting pitcher Jeremy Alderman had his arsenal up to par as he went the distance and earned his first win of the year on Friday night.

Top Speed got the scoring started early in the top of the first inning on a double from Steven Knudson that scored Vinny Rodriguez.

Palm Springs would answer a few innings later in the third with Ryan Raslowsky coming around to score on a Nick Jackson 2-out double.

The very next half inning, Top Speed would regain the lead on a long double down the left field line off the bat of Matt Martinez.

Jeremy Alderman would record another quality start for the POWER as he only allowed two earned runs in his 9 innings of work. Alderman also notched eight strikeouts in his third start of the year.

In the sixth inning, the POWER took the lead for good behind clutch pinch hitting for the home side. Connor Hornsby started the inning with a leadoff single and then Chad Clark reached on an error. The bases would be loaded after Harry Shipley was hit by a pitch and set the table for Miles Bice who delivered a 2-RBI single to take the lead. Erik Maki would tack one more run on an RBI groundout in that same inning.

The score would stay there behind another quality start for Jeremy Alderman as he only allowed two earned runs in his 8 innings of work. Alderman also notched seven strikeouts in his third start of the year.

The POWER will next be in action on Saturday night to play game 2 of the series against Top Speed. Game time will be 7:05 p.m. and gates will open at 6 p.m. 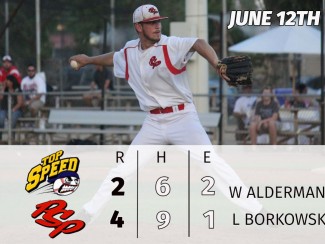