Another Victory in the Cards For POWER, 7-4 Over Aces

PALM SPRINGS, CA – It was a see-saw battle early on at Palm Springs Stadium on Wednesday night, as both teams traded leads in the first few innings, but the POWER held on to defeat the Inland Empire Aces by a 7-4 score.

James Crockett (Grad., Southern Utah University) started for the POWER and struck out eight before giving way to the bullpen in the fifth.  Josh Pond (SR, California State University, San Bernardino) inherited two runners with none out, and retired three straight batters to escape the jam. 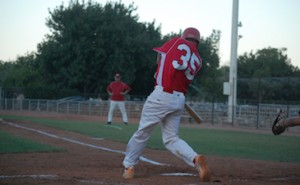 Pond earned his first victory of the year, thanks to the offense of the POWER coming through yet again. Curtis Gomez (SO, University of the Pacific) scored three runs for Palm Springs, while Hank Yates (JR, currently undecided), Austin Barrett (SO, Mercer University) and Frankie Torres (JR, Vanguard University) each collected two hits for the POWER, who improve to 36-4 on the season.

The POWER finish the SCCBL regular season action this weekend against the L.A. Thrashers on Friday and Saturday night at 7:05 p.m.  They will then have back-to-back days off in preparation for the postseason.

Game One of the SCCBL championship series will be Tuesday, July 26th at 7:05 p.m. at Palm Springs Stadium as the POWER host the So Cal Athletics. Gates open at 6:00 p.m. The Athletics will host Game Two at Rio Hondo Community College in Whittier on Wednesday, July 27 at 2:05 p.m.  The POWER will host game three, if necessary, on Thursday at 7:05 p.m. back in Palm Springs.